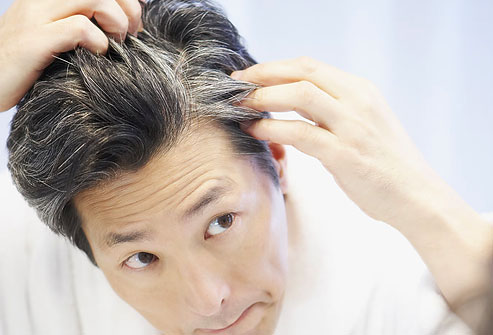 Hair graying or canities is a part of the chronological aging process of the body. It occurs regardless of gender or race. The age of graying varies with race and ethnicity.  Although a similar cut–off has not been clearly defined for Indians per se, 20 years has been arbitrarily accepted in certain studies. Premature hair graying has significant adverse effects on the self–esteem of the affected individual.

Melanin is the substance responsible for the colour of hair and skin. It is synthesized by cells called melanocytes by a process called melanogenesis. “Premature graying may reflect a genetically regulated untimely depletion of the melanogenic potential of the melanocyte reservoir of the affected area”.

Graying of hair is believed to have a multifactorial etiology. A genetic component seems to be the most significant factor, and an autosomal dominant inheritance has been proposed. A multitude of contributing etiologies exists, which include:

• Certain drugs and nutritional status, among others

• It may also occur in association with certain organ–specific autoimmune disorders.

Recent evidence suggests that the accumulation of reactive oxygen species in human scalp hair follicles leads to oxidative damage to hair follicle melanocytes which accelerate graying. As premature graying may reflect an overall acceleration of the physiological ageing process, it is postulated to be a predictor for the development of coronary artery disease and decreased bone density.

In men, graying of the scalp usually begins at the temples and in the sideburns. Subsequently it spreads to the vertex and then to the rest of the scalp. The occipital area is often the last to be affected. Women usually start graying around the perimeter of the hairline. Beard and body hair are affected later than scalp hair. Chest, pubic and axillary hair may retain pigmentation even in old age.

Gray hair is said to be more coarse and stiff than pigmented hair, is more susceptible to UV damage and needs more UV protection. It is more resistant to incorporating artificial color and is difficult to manage in general.  However, the thickness, growth rate and hair shaft elongation in non–melanized hair are significantly greater than in melanized hair.

However, treatment options still remain far from satisfactory and no definitive therapy is available at present. Reports of successful treatment are anecdotal. Para amino benzoic acid and calcium pantothenate tablets have been found to have some benefit in certain studies. Use of topical latanoprost (Prostaglandin F2 alpha) has been found to cause darkening of hair as an incidental finding. Oral Polypodium leucotomos, a fern extract with strong photoprotective and antioxidant properties may also provide some sun–protection for the graying hair.

The use of 0.5–5% topical melitane (acetyl hexapeptide-1, which is a biomimetic peptide agonist of á–melanocyte stimulating hormone) is recently being promoted for the repigmentation of gray hair. However, published evidence is insufficient. The role of herbal extracts such as Pueraria lobata has been found effective in a study with 35–65 years old Korean women as subjects.

Other treatments which have been tried with varying results include psoralens, phototherapy, copper, selenium, zinc, biotin and various antioxidants. “A dearth of definitive treatment options means that the mainstay of management of gray hair is using hair coloring agents.”